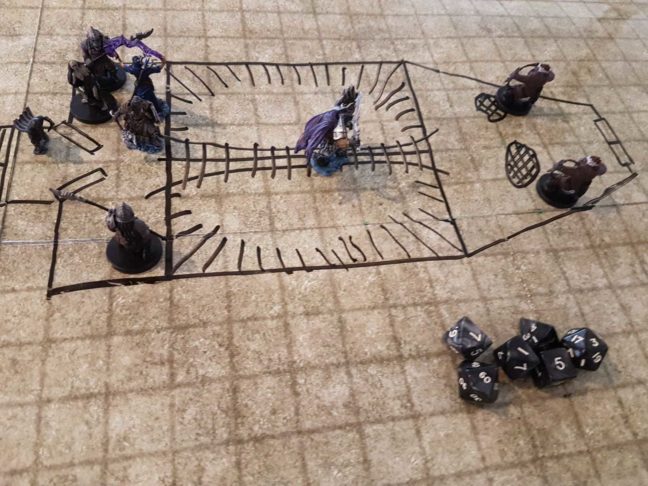 In a hot, dusty forge, an escaped pirate trades sword blows with the blacksmith’s apprentice. Alarmed by the fighting, a braying donkey starts the grindstone turning, and the two men have to duck in and out of the great rotating cogwheel festooned with swords and chains.

It’s late, and the bartender is alone for the night, when four thugs come to the tavern looking for an artefact. In the ensuing fight, a hot poker is knocked from the hearth and hits a curtain, which quickly catch fire. Before long the flames are working their way across the ceiling. A tables is flipped on its side for cover and glasses come smashing to the floor. The young bartender crawls behind the bar, grabs a burning log, and brings it down on someone’s head with a thwack.

An elf shoots arrow after arrow as more and more orcs threaten to overwhelm the battlements. It’s a narrow walkway, slick with rainwater, and soldiers go flying to their doom. Seeing his dwarf friend in trouble down below, he kicks a shield forward and uses it surf down the steps, peppering the crowd with arrows as he does so.

It’s easy to forget about the battlefield environment when playing a game of D&D. When we come up with adventures, we tend to focus on cool monster encounters and colourful NPCs: the setting is often a bit of an afterthought But as the examples above suggest – from Pirates of the Caribbean, Raiders of the Lost Ark, and The Lord of the Rings: The Two Towers respectively – no combat takes place in a vacuum, and even one or two terrain features can make a fight memorable and unique.

The environment of a battle is more than just window dressing. It needs to affect both the narrative and gameplay.

In game terms, terrain is probably going to do one of the following things:

If it doesn’t meaningfully change gameplay, it is essentially window dressing. That’s still cool, of course, but if it doesn’t affect the game in some way, players are probably going to forget about it (as are you).

Steal, steal, steal. DMs are under pressure to be original, but don’t punish yourself for adapting ideas from elsewhere. That’s creative, too. Films and video games can be great for inspiration, and there are some really good lists online to get you thinking, too (eg, this post from Hipsters and Dragons). The Dungeon Master’s Guide in 3.5 had whole sections on dungeons, wilderness, weather, and environment, and you can read it online at the SRD. The random tables in the 5th edition DMG (Appendix A) are also really good for sparking your imagination.

Visual aids. If you use miniatures, why not invest in some terrain pieces like those from Mantic Games or WizKids. Just having them at the table might be enough to make you use them creatively. (If you are interested in tabletop terrain that works with miniatures, I will be reviewing the new WizKids WarLock tiles when my pre-order arrives over the next few weeks.)

Remember the fantastic. It’s right there in the introduction of the Player’s Handbook: ‘The Dungeons & Dragons roleplaying game is about storytelling in worlds of swords and sorcery.’ Instead of a stone wall, have a wall of fire. Instead of a rope bridge, use a force field. Don’t worry about explaining why the magic is there every time. It’s magic, not physics.

Think about the five senses. This is a basic creative writing tip but it works for combat encounters, too. What can the characters hear? Is there an odour in the room? What’s the air like? What’s the temperature? These things matter, and sometimes they even have an in-game effect. A noisy forge makes it easier to sneak up on your opponents. A humid jungle can be a nightmare for characters in heavy armour.

Think in three dimensions. Dungeon maps tend to be more horizontal than vertical, probably because it’s easier to draw on a single sheet of paper, but some of my most memorable battles have been in three dimensions: a mine shaft, a tower, a series of platforms floating in the sky at different heights. Try it!

For an even simpler approach, Fate Core has a neat way of defining Obstacles.

This is not a bad starting point for thinking about terrain in your adventure. Focus on your current adventure and see if you can come up with some hazards, blocks, or distractions that could use in encounters. For example, if your characters are making their way through some rocky crags, you could have steep slopes, scree, undergrowth, chasms, and cliffs, all of which are ‘blocks’ but work in different ways. You could also make an encounter memorable with bad weather like snow, wind, or rain. Use the idea of Aspects (Fate’s ‘big thing’) and give your battlefield one or two noteworthy features that the players can engage with.

Less is more. One or two terrain features is all you need. More than that and you are going to end up with a very complicated encounter, for you and the players. You probably have enough to remember as it is.

Beware the grind. If a character is less effective at hitting the enemy because of the battlefield environment, two things are likely to happen. One, the combat will drag out. Two, the player will get frustrated and feel a loss of agency. If you are adding terrain elements, try to include ways that players can avoid or mitigate their effects.

Not just for boss fights. If you know you tend to forget about battlefield terrain, think about the first encounter of the session (what Mike Shea calls the ‘strong start’). You can do more preparation for this encounter than any other, so it’s a good opportunity to try something new.

Check the difficulty. In most situations, the battlefield favours the defenders, (ie, the enemy). Otherwise, what are the enemy doing there? Advantageous terrain can turn a ‘medium’ encounter into a ‘hard’ one and a ‘hard’ encounter into a ‘deadly’ one. Be careful, especially at lower levels when characters have fewer options (and hit points).

Know the rules. Depending on the environment, you may need to refamiliarize yourself with the rules for concealment, difficult terrain, squeezing into a smaller space, cover (including how it works on a grid), and even underwater combat.

An empty room is OK sometimes. Adventurers need somewhere to rest. Perhaps they want to feel powerful cutting down hordes of enemies. Perhaps the encounter is complicated enough as it is and a fairly bare arena is sufficient. Make life easy for yourself and choose when you want the environment to have the most impact.