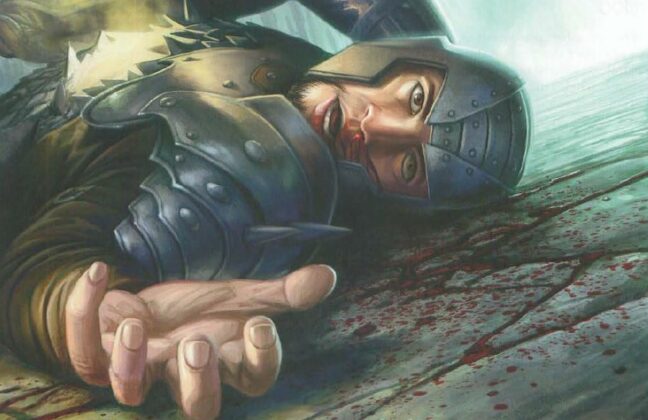 Dying in D&D is momentous. A big part what makes the game fun is creating a character, investing in them, breathing life into them, and watching them grow from session to session. You don’t ‘win’ D&D by killing things and gaining XP: you win when you have stories to reminisce over with your friends. So when you watch a character die before their time – when you realize that you are never going to play them again – that can be a surprisingly moving moment. And it’s important, therefore, that it’s handled properly.

Character death can be unpredictable. It can be caused by a nasty trap, a stupid decision, a dragon’s fiery breath, or insurmountable odds. But it can also be truly random. I’ve seen low-level characters get killed by an animated broom.

If you’re running a session zero (and you should), have a conversation about character death. How do characters feel about it? Is it off the table? Is it part and parcel of adventuring life? Does it make for a good story? Are there means of bringing characters back to life? If so, how easy are they to obtain? Perhaps the characters simply ‘respawn’ like they might in a video game; perhaps they need the aid of rare and powerful magic or divine intervention. Plenty of great characters in fiction have come back from the dead – Gandalf, Harry Potter, Jon Snow, Sherlock Holmes, Kenny McCormick – but it’s usually an important and memorable moment, so savour it. Consider whether they come back changed somehow, either spiritually or physically.

It’s important to have this conversation early as 1st level as the deadliest in the game. A single crit from a half-decent enemy can send a character unconscious, and crits happen five percent of the time. It can also be an important conversation to have if you’re running some of the deadlier campaign adventures. Rime of the Frostmaiden and Lost Mine of Phandelver both have some very deadly encounters at low levels, and Tomb of Annhilation even recommennds a ‘meat grinder mode’.

Perhaps your players are divided: some want embrace the risk, while others seek the assurance of playing the same character session after session, even if they make a really bad mistake. D&D is meant to be fun, so don’t force something on the group if they’re not happy with it. Perhaps you can agree on some alternatives to dying (see my ideas below). Perhaps you decide that, in some situations, it’s OK for the DM to make a judgement call: if the death is heroic, fitting, memorable, or just, then the character dies permanently, but if it’s anticlimactic, ridiculous, inconvenient, or unfair somehow, then perhaps the DM comes up with an alternative.

Sometimes death isn’t the right option. Below are some variants you might want to use.

Some DMs take a very adversarial, old-school approach with their players, and character death is common. Others try to make sure that the same characters are there from one session to the next, and see character death as a terrible mistake. For me, character death is an opportunity for fantastic storytelling, but it needs to be given the attention it deserves. If the death doesn’t feel ‘right’, then think carefully about whether it’s something you want to go through with.