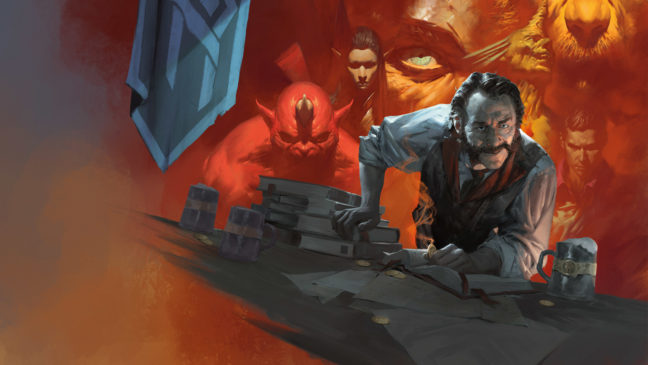 For teachers like me, this week marks the start of a new term: a busy time. If you’re a DM, real-life workload can be a significant barrier to your game prep. How do you get ready for a session when you’re completely snowed under?

This article explores how we can prep less and improvise more, with a focus on dungeons.

If time is an issue, remind yourself that you don’t have to make something new for your players to have a good time! Reuse old modules, have a look at the DMs Guild, go back through old notes. If you’ve got something serviceable, be kind to yourself and spend your planning time on something else.

In my current campaign, the party was exploring a creepy rural town called Gimmerton (a name Wuthering Heights fans might recognize). I had to improvise something, and I remembered that there was a whole section of Curse of Strahd, Wachterhaus, which I had never used, despite DMing the adventure twice. So I stole it in its entirety. It worked fine, and I don’t think any of the players were particularly conscious of my stealing it.

If you can’t steal an adventure, you can at least find a good map. Dyson Logos has a fantastic range, but it’s also worth following cartographers on social media, like Mike Shley, Anna B Meyer, and 2-Minute Tabletop, to name a few. Reddit has some great mapping communities, too, like r/battlemaps, r/dndmaps, and r/mapmaking.

If none of these maps is quite what you’re looking for, you can, of course, generate one. The Dungeon Master’s Guide has random dungeon tables in Appendix A, and donjon has a great random dungeon generator with a considerable number of ‘dials’ to play with. Donjon maps can also be imported into Dungeon Scrawl, a very cool map-maker, still in beta, but well worth checking out.

These dungeons are simple enough to make in your head, and can probably provide enough for fun for a couple of hours’ play at least. You only need these five steps:

The idea is generally credited to JohnnFour, and you will find numerous examples of it in action across the Internet (eg, here). It’s such a good idea that Wizards of the Coast used it for their model adventure in the 4th edition DMG.

This post is titled ‘Improvising Dungeons’, and a dungeon, of course, is more than just a map. If you’re having to improvise encounters and rewards, how do you do that?

Encounters can be tricky. To some extent, it takes a bit of practice to get a feel for it. There are decent online encounter calculators like Kobold Fight Club and the one on D&D Beyond (still currently in beta), but, in truth, there’s no such thing as perfect encounter balance, and 5th edition is filled with spiky edges that can make encounters unpredictable. Use these calculators to get a sense of difficulty levels and which monsters are going to be too easy or too hard, but then improvise from there. Encounter balance matters more at lower levels when characters have fewer hit points and players have fewer options to avoid difficult situations.

As a general rule of thumb:

Making an encounter more challenging is always easier than making it less deadly.

Part of my prep for a session is to jot down a few monsters of different challenge ratings with a note as to how many I can use without overwhelming the party. In my campaign, characters tend to level up once every three or four sessions, so these notes remain useful for several weeks, usually.

An example of my session notes. This is for a group of four 8th-level characters.

If you’re improvising a dungeon, don’t worry too much about treasure. If you give out too much, just hold back a bit on the rewards for a few sessions before you give out any more. Be careful with major (ie, permanent) magic items, though. As a general guide, an adventuring group should only get a couple of uncommon items in Tier 2, and probably shouldn’t get to see rare, very rare, and legendary items until 10th, 16th, and 19th level, respectively. But, of course, you do you. Characters in Curse of Strahd can pick up a legendary item at level 3, so, if it fits your story, go for it.

Final thoughts: describing on the fly

For me, maps and monsters are the easy bit. The challenging bit is coming up with an evocative description. Some tricks, then:

Finally – a controversial tip – ask your players to contribute to the description. ‘What does the mural show?’ ‘What are you looking for at the desk?’ ‘What do you think is beyond the door?’ Great DMing doesn’t happen in a vacuum: a great game absolutely requires players to do their bit, too. We all build the world together.