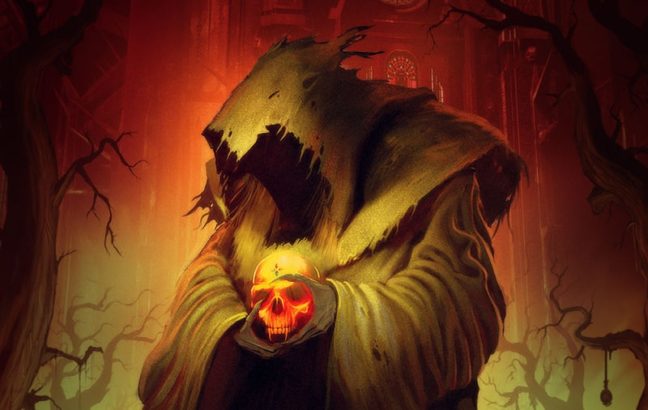 Warning: this post mentions topics that some may find disturbing or upsetting.

Chapter 3 of the Player’s Handbook (‘Classes’) begins like this:

‘Adventurers are extraordinary people, driven by a thirst for excitement into a life that others would never dare lead. They are heroes, compelled to explore the dark places of the world and take on the challenges that – ’

Hang on: heroes? Who said anything about heroes?

The term ‘evil’ will mean different things to different people. For some people, evil is an absolute, supernatural, even eternal force which stands in binary opposition to good. For other people, there may be evil acts, but the existence of evil people is a matter of debate. Some other people find the whole concept of evil unhelpful and find it more useful to see personal evil as a product of unbalanced behaviour: selfishness, ignorance, hatred, anger, and so on, but not necessarily an innate wickedness.

To some extent, the definition of ‘evil’ in your D&D games is likely to be shaped by your own moral beliefs. Gary Gygax was a devout Christian. Contrary to what the moral panic of the 1980s might have had us believe, his world was one of righteous paladins and chaotic evil demons: a world where moral alignment mattered. But in some settings, good and evil are less black and white and more shades of grey. In Eberron, for example, which was heavily influenced by film noir, good people can do evil things and vice versa.

The Book of Vile Darkness, an accessory by Monte Cook for 3rd-edition D&D, devotes the entire first chapter to ‘the nature of evil’ and provides a list of ‘evil acts’:

That’s a long list! And yet, how many of them are exclusively evil? I can think of many player characters who have lied, cheated, bullied, sought vengeance, or succumbed to greed. Their behavior was hardly righteous, but was it evil? Context and intent are everything.

Ultimately, how you define evil is something for your table to discuss as a group (more on this later). A question to think about is, what is the difference between being evil and being not good (ie, neutral)? Neutral characters don’t make personal sacrifices to help others, but that doesn’t make them evil. D&D defines evil as hurting, oppressing, and killing others. As a corollary to this, I think it can be argued that evil characters are also fundamentally self-interested: either because they ambitiously pursue personal power (like Magneto and Emperor Palpatine) or because they follow their own lust and greed in a completely hedonistic sense (like the Joker). Self-sacrificing and altruistic they ain’t.

Putting this question to one side for the moment, how and why would you run an evil D&D game – and should you?

If you’re playing with a party of evil characters, there are two important obstacles to overcome.

The first is sensitivity. If you are set on running an evil campaign, you probably want to agree some ground rules about ‘how evil’ you want to go. In some way or another, everyone will have encountered evil in storytelling already, whether it’s Satan, Darth Vader, Lord Voldemort, or the Sheriff of Nottingham. But there are many kinds of evil that are difficult for people to talk about, or even taboo. Cannibalism, sadism, torture, abuse: these can be extremely uncomfortable subjects for people to engage with, and they shouldn’t have to if they don’t want to.

No kind of improvisation is 100-percent safe, but, as a bare minimum, run a session zero, even if you all know each other well. (Frankly, a session zerio is a good idea for lots of reasons, but this is certainly one of them.) Give players the space to discuss how far they want to go. You might want to talk about your campaign as if it had a film rating: ‘is this PG, mature, or adult?’ Some gamers talk about lines and veils, terms coined by Ron Edwards: lines are hard limits on content, meaning these things won’t show up in the game at all, whereas veils are soft limits, things that might get alluded to or implied but will never be directly described (in the same way that a film might ‘fade to black’). Lines and veils are helpful but not perfect: until it comes up, people don’t necessarily know they will find something uncomfortable. So, you may also want to employ John Stavropoulos’ X-Card approach. Give players the chance to pause, rewind, or fast forward a scene that they are not OK with.

The second problem with an evil campaign is the group dynamic. D&D assumes that you and your friends are working as a team. It’s right there in the introduction of the Player’s Handbook: ‘In the Dungeons & Dragons game, each player creates an adventurer (also called a character) and teams up with other adventurers (played by friends).’ Evil characters, however, have a tendency to be self-serving. They don’t make sacrifices for other people. They are not, on the whole, altruistic, benevolent, humane, or compassionate. They don’t care very much whether anyone else is hurt or hindered by their actions. In a team game, this matters.

How do we get around this? One option is to only allow characters who are lawful evil. This is the approach taken by the Adventurers League, and even then you can only play LE if you are part of a faction like the Zhentarim or the Lords’ Alliance. Lawful evil characters are still self-serving, but they at least have a semblance of honour or ‘play by the rules’. But what if your group wants to play characters who are neutral evil or even chaotic evil?

Well, there are two considerations. Firstly, while evil characters are generally self-serving, they aren’t necessarily stupid. If five evil characters are trying to steal a dragon’s hoard, basic game theory suggests that they are better off working together, and even once the dragon is defeated, it is still in the interests of individual characters to split things fairly as to do otherwise would jeopardize their future chances of commerical gain. In short: if you try to screw over your teammates, they will do the same to you. It’s not a good long-term strategy really.

Secondly, evil doesn’t have to be absolute. Neither do good, law, chaos, and neutrality, come to that. Alignment is a tool for defining a character’s identity. There’s no need to be fundamentalist about it: very, very few human beings are truly consistent, and no one said it had to a straitjacket. In fact, some of the most interesting characters in fiction are also some of most nuanced. Cersei Lannister will do anything to protect her children. Albus Dumbledore is kind but also manipulative and arrogant. Gregory House is selfish, a liar, and a consumate jerk, yet he is genuinely committed to his patients throughout the series. Just as ‘good’ heroes have flaws, good villains have redeeming qualities. And characters can grow over time, of course (and should).

So yes, you can play an evil campaign, provided it is handled sensitively. But the question remains: why would you?

Now we get into pop psychology.

Tabletop roleplaying games are a form of escapism. They offer us a freedom many of us wish we had. The more we play D&D, the more powerful our characters become. Not only that, but the game actively encourages us to amass wealth and defeat enemies in combat. Is it any wonder that we are tempted to play evil characters? There’s a reason the murderhobo archetype is so prevalent.

An evil character can be intensely liberating, but perhaps there is a deeper reason as to why we are drawn towards murky morality. Jung believed we needed to confront our ‘shadow selves’ in order to grow as human beings. Freud wrote about the id, our most basic desires: our biological instinct to pursue pleasure and avoid pain. Doing the right thing all the time is hard. Sometimes, it’s easier – and more fun – just to do whatever you want. Everyone wants to unleash their inner Hyde once in a while.

An evil D&D game, then, can be extremely fun, either as a one-shot or even as a full campaign. But it’s not for everyone. And that’s OK.