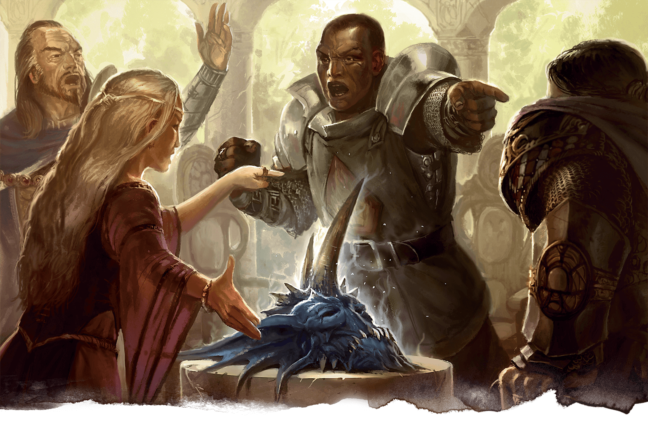 In this post, I am going to look at feedback surveys as a way of hearing from your players. They don’t need to be done frequently to provide a useful insight into how the game is going.

D&D rests upon good relationships. People put a lot of themselves into this hobby: not just time, money, and energy, but potentially an element of personal vulnerability, too. If you’re giving up three or four hours a week to sit at a table with your friends, building stories together, you want to have fun while you’re doing it.

The problem is, different players enjoy different things, and in a game that rests on personal relationships, it’s not always easy to bring this up. What if you want a game like Critical Role – immersion heavy with lots of roleplaying and storytelling – but your DM is more interested in wargaming over five-inch battle grids? What if you want something light-hearted and humorous, but everyone else wants to take the game a bit more seriously?

Emotional intelligence and the ability to read the room are key qualities in a good DM, but even the most perceptive DM is going to misread the players sometimes, especially if you’re playing online. It’s very easy for DMs to get caught up in their own personal experience and forget that the players might be looking for something different.

This is where a feedback survey can be, literally, a gamechanger. If it’s done online, it can be anonymous, unfiltered, and personalized: a chance to speak openly about how things are going. That does mean, of course, that you might get feedback you’re not expecting. But that’s kind of the point.

Breaking down the feedback survey

Some DMs do a quick survey after every session. Personally, that seems a bit overkill to me. You might end up with more data, but it’s not going to be as rich, potentially. You might be able to track whether players enjoyed a particular session, for example, but will the survey tell you why they enjoyed it? For most groups, a survey two or three times a year is probably about right.

I try to avoid textboxes as it helps keep the answers anonymous (and makes it quicker to complete). I tend to start with a couple of more ‘administrative’ questions (eg, session length, session frequency, preferred online platform, etc) before moving on to questions about playstyle. Here are some of the questions I would usually ask:

This year, I’ve included a couple of questions about DM issues and player issues. The players can rate each issue based on how much it has been a problem: ‘never’, ‘seldom’, ‘some of the time’, or ‘most of the time’. If you’re using something like SurveyMonkey, you can score each answer based on player responses: ‘never’ would be +0, ‘seldom’ would be +1, and so on, up to +3. It helps you see what the group consensus is, and whether it changes over time.

Your own list might be a bit different. Keeping your questions the same, though, gives you the chance to track over time whether there has been any kind of change or improvement. Earlier in the year, for instance, my biggest issues as a DM were ‘inflexibility’, ‘impatience’, ‘rules knowledge’, and ‘poor description’. When I ran the same survey last week, my scores had gone down from two ‘seldoms’ to one, and only one issue, ‘lack of preparation’, had got worse.

I like end with the simplest but most important question: Overall, how much do you enjoy playing the campaign? Again, I give options like ‘always’, ‘most of the time’, ‘sometimes’, ‘never’, but you could use other ratings.

If you’re happy with the feedback: great! It might be that there are no great surprises: that you know your players well and can read the room. It’s still good to check.

On the other hand, there might be some unexpected negativity. If so, try not to take it personally. DMing is hard, and people get better at it over time. In fact, it’s very difficult to get better at anything without constructive feedback. Perhaps go back to your group and ask for more detail. You could talk to them separately or do another survey with the option to include fuller answers. See if there are one or two things you can focus on, like speeding up combat or prepping more efficiently. Alternatively, perhaps take a break from DMing for a while and come back to it when you’re feeling more positive.

At the end of a campaign, you might want to combine the feedback part of your survey with a jokey ‘awards’ ceremony. At the end of our Tomb of Annihilation campaign, for example, we gave out awards like the Sean Bean Award for Best Character Death and the Matt Mercer Award for Best Roleplaying. D&D might not be a game about ‘winning’, but when you replay these moments with your friends, you come pretty close.