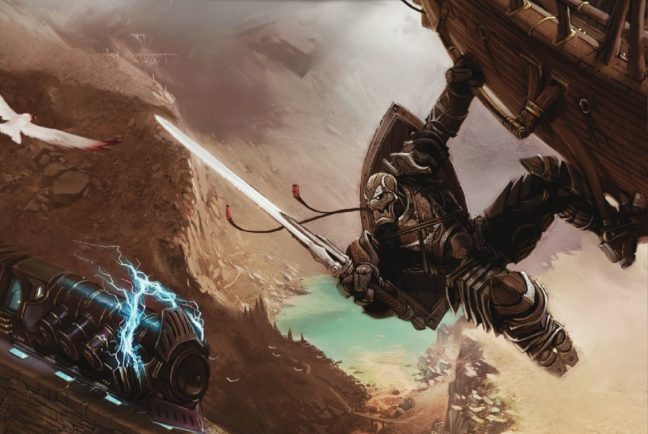 Making your own homebrew campaign setting can be a daunting undertaking. World-building can be very time-consuming, and if you’re not really that interested in cartography, demographics, cosmologies, pantheons, and so forth, you might find yourself reaching for a someone else’s work.

How should you go about using a published campaign setting?

A published campaign setting can be overwhelming because of the sheer volume of lore you are drawing upon. The Forgotten Realms Campaign Set was released in 1987. Greyhawk, Gary Gygax’s home setting, was created at least a decade earlier. Even Eberron, a relative newcomer on the D&D scene, is now 16 years old and has appeared in three different editions of the game. It can be hard to know where to start.

Here are my tips.

Published D&D settings can be very different. Think about the general ‘vibe’ you’re going for, and go from there. To summarize a few:

You’ve also got the Inner Sea region, the excellent setting of the Pathfinder RPG, and the various Magic: The Gathering crossovers, if that’s your thing.

It’s worth mentioning that only two of these settings have received substantial 5th edition support: Eberron and the Forgotten Realms. It’s also worth setting that many of these settings have many different flavours within them. Eberron, for example, could be a Raiders of the Lost Ark–style temple run in Xen’drik, a Chandleresque hard-boiler in Sharn, a Lovecraftian cosmic horror story from the Far Realms, or something else entirely.

This is the approach of Lost Mine of Phandelver and Dragon of Icespire Peak, both set in the small frontier town of Phandalin and its environs. ‘The Forgotten Forge’, the 1st-level adventure in the original Eberron Campaign Setting, takes place entirely in Sharn. There is no reason to cover the whole world at once. Start small and build out from there.

This is a good tip for any campaign, frankly, especially if you start at 1st level. The world that matters the most is the world you build with the players. However, there does come a point where you want to increase the scope. As a rule of thumb, consider expanding out a little with each tier of play. Go to Xen’drik in Tier 2. Have a big bust-up between nations in Tier 3. Walk the planes in Tier 4. Or mix it up. The Dungeon Master’s Guide has some good guidance on pages 36–38.

One of the advantages of using a published campaign setting is the abundance of material you can borrow from, so take advantage of it! Raid old modules, ask questions on subreddits, consult the Dungeon Masters Guild and DriveThruRPG for sourcebooks old and new. The biggest campaign settings have wikis that are fairly reliable, and creators like Ed Greenwood and Keith Baker (to name but two) are fantastic for regularly sharing their thoughts about their settings on Twitter and their own websites.

What can you steal? Maps, art, monsters, NPCs, dungeons, artifacts, storylines, lore. In short: anything! It’s your campaign, and the published material is there to make your life easier. There’s no shame whatsoever and borrowing liberally from any sources you can find.

4. Drill down the ‘aspects’

This is a trick from Fate Core that I find handy.

‘Aspects’ are Fate’s big thing. An aspect is a phrase that describes something unique or noteworthy about whatever it’s attached to. If you find the copious background reading on your campaign setting to be a bit much, try reducing the setting down to a series of aspects.

For example, let’s say we’re running a campaign in the Forgotten Realms. One of my favourite parts of the Realms is the Silver Marches, sometimes called Luruar. At kingdom scale, I might pick out eight to ten key sites that want to remember and then reduce them to ‘aspects’. It might look something like this:

This might be a bit minimalist for some, but for time-pressed DMs, it can be a useful shorthand. You can then improvise around these descriptions and make the setting your own (see the sixth point, below).

Published campaign settings are not just a series of locations: they are also filled with people and organizations. And sometimes, the sheer number of forces at work can be a little intimidating for someone new to the setting.

My tip: restrict yourself to three big movers and shakers at any one time. In the Forgotten Realms, your campaign might revolve around the Lords’ Alliance, the Arcane Brotherhood, and the Kingdom of Many-Arrows. For Eberron, you might focus on the Aurum, the Dark Lanterns, and House Cannith. Obviously there’s no need to make this an absolute rule – by all means throw in a fourth or fifth if you want – but too many factions can lead to gambit pileup. Give your players a chance to learn more and more about the factions they know well and let the others slip into the background.

One of the biggest problems with a published campaign setting is the feeling that you have to honour it in some way. ‘What if my players know the setting better than I do?’ ‘Is my Sharn “accurate”?’ ‘Will the players want to meet Drizzt Do’Urden?’

More important than any of the other tips in this article is this one: make the setting your own. Do you want to run a Waterdeep campaign with Victorian-era technology? Go for it. Do you want an Eberron campaign where the Lord of Blades won the Last War and machines rule the world, Terminator style? Sounds fun. Fancy a Rime of the Frostmaiden–Dark Sun mash-up, with a post-apocalyptic tundra instead of a blasted desert world? Give it a try.

Whatever game you run, make sure the heroes at the heart of it. If you want to introduce Volo or Elminster or Drizzt or Mordenkainen, feel free to. But its your heroes’ story, not theirs. Treat a published campaign setting as a starting point, not an endpoint. If you want to rip it up and do your own thing with it, do. Make whatever changes you want.