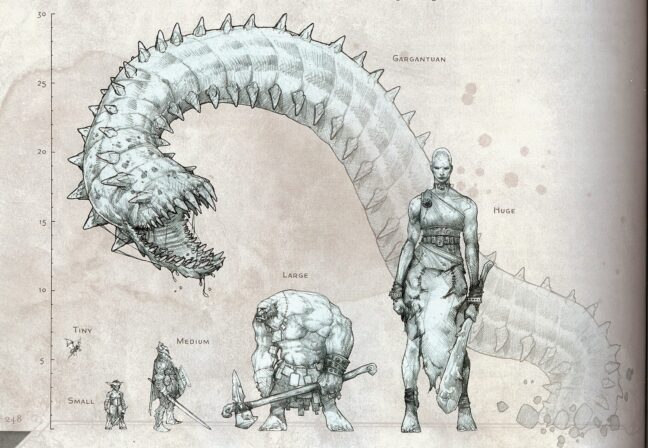 How big is an ancient dragon? How tall is a cloud giant? What is the wingspan of a roc?

Having painted a few dragon minis over the last year, it got me thinking about monster scale in D&D.

In 3rd edition – the edition I started with – there were eight size categories: fine, diminutive, tiny, small, medium, large, huge, gargantuan, and colossal. But this was something of an anomaly for D&D. 2nd edition AD&D only went down to ‘tiny’, as did 4th edition, and 5th edition has followed in this tradition. 1st edition had nothing smaller than ‘small’ and nothing larger than ‘large’. No edition except 3rd has had a size category above gargantuan. Tiny is roughly the size of a house cat. Small: a child. Medium: an adult human. Large: a horse. Huge: an elephant. Gargantuan – defined in 5e as ‘anything larger than 20 feet [6 metres]’ – a whale.

I would argue that ‘anything larger than 20 ft‘ is a pretty vague category. A telegraph pole in the UK is about 30 ft (9m) tall. The iconic Routemaster buses in London are about 37 ft long (11m). Big Ben is 310 ft tall (95m). And the Shard, at one point the tallest building in the EU, is over 1,000 ft tall (310m). All of these things are technically ‘gargantuan’ in D&D terms. (By the way, Big Ben is technically the bell. The famous tower is actually called Elizabeth Tower.)

I thought it would be fun to have a closer look at some of D&D’s largest monsters to give a sense of their scale. I am also going to think about the scale which is usually used for D&D minis (1:60, or 5 ft to 1 inch) to see whether the models on market match up.

Maybe we should start with the only gargantuan D&D monsters to have existed in real life: whales and dinosaurs.

The brontosaurus appears in Volo’s Guide to Monsters, where it is described simply as ‘massive’. Adult brontosauruses are estimated to have weighed up to 15 tonnes (17 short tons) and measured up to 72 ft (22m) long. A size-accurate D&D mini of a brontosaurus would need to be 14 inches (36 cm) long.

The sperm whale features in Icewind Dale: Rime of the Frostmaiden. These are described (slightly inaccurately) as growing up to 70 ft long. In real life, a sperm whale is closer to 52 ft or 16m, so a ten-inch-long mini (26 cm).

There are no stats for blue whales in D&D, but I include them here as a comparison for fantasy creatures, since these animals are believed to be the biggest animals to have existed. Blue whales can reach a maximum length of nearly 100 ft (or 30m). A size-accurate D&D mini – biggie? – would need to be about 20 inches (half a metre) long.

None of the giants in the Monster Manual are gargantuan. But how do they compare in size?

What about titans, or empyreans as they are now known in 5th edition? No height is given in the 5th edition Monster Manual, but in 3rd edition they are described as being about 25 feet tall (7.6m). Hang on: isn’t that smaller than a storm giant? Well spotted. Yes, there has been some inflation in giant sizes in the last 20 years of D&D, and in 3rd edition, most giants were five or six feet shorter than their 5e counterparts.

Sadly, 5th edition is rather light on detail when it comes to the size of these creatures. But previous editions were more specific. The wonderful 3rd edition Dragonomicon gives precise measurements for chromatic and metallic dragons of every age range.

The red dragon is the largest of the evil dragons, with a wingspan of 60–150 ft (18–46m) and an overall body length of 120 ft (37m). That’s about as wide as the Arc de Triomphe and as long as a runway stripe. Silver and gold dragons are of a similar size, although gold dragons have a slightly narrower wingspan, more because of their mantalike wings than anything else. For an ancient dragon of this size, a D&D mini would need to be two feet (60cm) long with a wingspan of twelve to 30 inches (30–76 cm). That’s about the size of the awesome T’Raukzul mini from Reaper (see below).

The 5th edition Monster Manual is very specific about the tarrasque’s dimensions. It is 50 ft (15m) tall and 70 ft (21m) long. That’s about as high as a five-story office building and as long as a cricket pitch. A tarrasque mini would need to be ten inches high (25 cm) and 14 inches (35 cm) long to be the right scale for other D&D minis, and that’s roughly between A4 and A3 in paper sizes. It’s also about the length and height of my toaster!

No dimensions are listed for the kraken in 5th edition. In 3rd edition, though, a kraken is described as being between 60 and 90 ft in length (18–27m). So a kraken mini would be huge: somewhere where between one and one and a half feet.

The 5th edition Monster Manual states that the roc has a wingspan of 200 feet – or more. That’s 60 metres plus: nearly double the length of a blue whale. The wingspan of a Boeing 747 is 64 metres. Build to scale, roc mini should be about 40 inches (1 metre) wide, wings fully extended. That’s half the length of a standard-sized bed, or about the width of a standard door. In other words, Grimtalon from Reaper Bones – by no means a small miniature – is about one-third of a roc’s true size.

The table on page 6 of the Monster Manual shows how much space a creature of a particular size controls in combat. What many people miss is the fact that the size for a gargantuan creature – 20 ft by 20 ft – is only a minimum. In other words, assuming a combat grid of 5-ft squares, some of the monsters above could be taking up much more space than that.

If you know a creature’s length in feet – or can take an educated guess – round it to the nearest multiple of five. That’s the space it takes up! Why not? If you want your ancient red dragon to be 24 squares on a side, go for it. If you want your roc to be 40 squares wide, mark it out and watch your players’ jaws drop. These creatures are BIG. They should be impressive.

If you don’t have a mini big enough (and hey, you probably won’t), you could also mark out a piece of coloured paper or card and stick the mini in the middle. If you’re using a virtual tabletop, the tokens are virtual, so scale ’em up! (Note that this works better for creatures that are longer than they are tall. A storm giant, for example, is 26 feet tall, yet they are technically huge, not gargantuan. To make up for it, they have reach. You could do something similar for other ‘titanic’ creatures.)

Alternatively, of course, switch to theatre of the mind. Your description can be better than any SFX team. Try to get the players to appreciate the sheer immensity of the foe before them. Players love demolishing stuff. And you know what they say: the bigger they are, the harder they fall. Give the players a chance to feel epic.