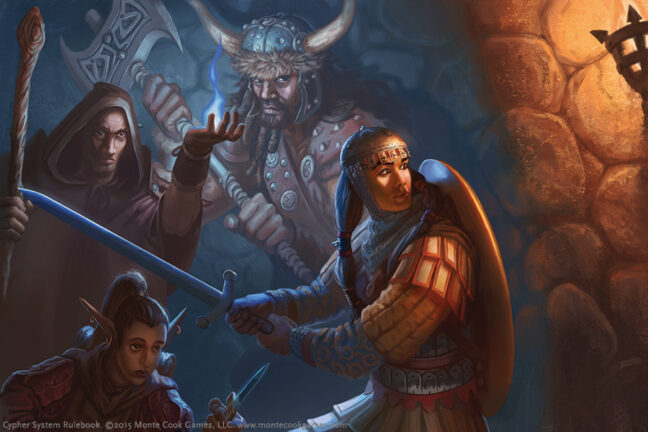 Yesterday evening, my friends and I played a Cypher System one-shot. None of us had played the Cypher System (or Numenera) before, although all five of us have experience of roleplaying games generally.

Two days previously, we had agreed to try a post-apocalyptic genre: dystopian London in the near future, with a climate disaster and a complete collapse in social order. Think Mad Max meets Deus Ex meets Nineteen Eighty-Four.

We had four characters:

Here are my observations at the end of a three-hour session. Before I start, a hat-tip: Justin Alexander’s system cheat sheet was a godsend, and if you are thinking of playing a session of the Cypher System, I highly recommend you have it in front of you.

Character creation is streamlined, intuitive, and relatively speedy. (I wrote about this in more detail in my previous post here.) The system does a great job of facilitating different genres and playstyles.

Combat is fast and narrative-led. Having players roll all the dice frees up the GM considerably. I wasn’t twiddling my thumbs by any means – I found I was constantly thinking up target numbers, for instance – but my turn was over very quickly, and the focus was more on description and imagination than dice rolling and rules calls.

Dice rolls offer varied degrees of success. In D&D, a 20 is an automatic hit and a crit, and 1s are automatic failures, but only on attack rolls and death saves. Most of the time, rules as written, your roll is either a success or a failure. In the Cypher System, 17s, 18s, 19s, and 20s offer you slight boosts to your attack rolls, like the chance to stun an enemy or deal extra damage, and 1s give the GM a free ‘intrusion’: a complication of some kind, rather like the ‘compel’ mechanic in Fate. (I see ‘free’ intrusion, by the way, because GMs can actually make intrusions at other times, too: the only difference is that the player normally gains XP for an intrusion, but on a natural 1, they don’t have a choice.) In other words, a quarter of your d20 rolls in combat are going to be interesting.

Mundane equipment is largely abstracted. All light weapons do 2 damage, for example, and armour is essentially just damage reduction. There are optional rules for making weapon types a bit more distinctive – crushing weapons ignore armour, slashing weapons are more effective on unarmoured foes – but the crunch is minimal. There also isn’t much of an economy: items are essentially expensive, very expensive, inexpensive, or somewhere in the middle, and a few very rare items are ‘very exorbitant’. Some players won’t like this very much, as they want the opportunity to optimize, but, to me, a character’s equipment isn’t of much narrative interest anyway, and I welcome the chance to handwave it a bit. The focus becomes them as characters, not the gear they’re carrying.

Cyphers are fun. If you’re not familiar with the concept, cyphers are essentially single-use abilities that characters pick up in the course of their adventures. Unsurprisingly, they are the Cypher System’s ‘big thing’. Cyphers might be potions, pills, nanotechnology, smartphone apps, gadgets . . . anything. They can also be subtle if you’re running a game without obvious fantasy elements: a stroke of luck, a haunting song, a bolt of inspiration. Because cyphers are single-use, they don’t run the risk of ‘breaking the game’ in the way that magic items do in D&D, and because characters are only allowed to have a few at a time, there’s an incentive to use them regularly.

Damage and recovery is handled well. Much has been written about the weirdness of D&D’s hit point mechanics, and various attempts have been made to come up with something more naturalistic. (Think about those ridiculous moments where a character withstands a ton of damage, from a dragon, say, or a bad fireball, only to be taken down by a rat bite.) The Cypher System doesn’t iron out these inconsistencies completely, but it has nice mechanics for taking and recovering damage which feel a little more realistic.

Target Numbers take a bit of getting used to. In D&D, it’s actually quite rare that a DM has to come up with a DC on the fly. Whether it’s Armour Class, a save DC, a spell effect, or something else, you probably have the DC in front of you somewhere, and if you don’t, then the difficulty categories are quite broad: 10 is easy, 20 is hard, 30 nearly impossible, and so on. In the Cypher System, I found I was constantly having to make a call as to what the Target Number would be. Perhaps that’s down my inexperience with the system, however.

Light weapons seem ineffective. This was a weird one. In the Cypher System, damage is a flat number, not a roll, and light weapons all do 2 damage. An opponent’s Armour is also a flat number, reducing damage like Damage Reduction in D&D: medium armour, for example, provides an Armour of 2. So here’s the thing: if you’re a character with a light weapon – a knife, say – and you’re up against an opponent in medium armour (eg, chainmail), your 2 damage is reduced to zero every time you hit, and you would essentially have to roll a 17 or higher to do any harm at all (17+ deals extra damage in the Cypher System). Perhaps I’ve missed something, but this seems a little debilitating.

There is no defined skill list. Some players might welcome this, but I felt skills in the Cypher System could be better explained. The system presumes that you do have skills – you can be ‘trained’ or ‘specialized’ in skills, for example, and both have defined in-game effects – but new players aren’t given much guidance as to what skills are available. Don’t get me wrong: skill lists are often handled badly in tabletop RPGs, 5th edition D&D included, but having no skill list at all isn’t necessarily better than having a bad skill list.

Fantasy magic is going to feel very different to D&D. Let’s say you want to play a wizard-type character who can throw fireballs, channel lightning, put monsters to sleep, that sort of thing. In the Cypher System, you would probably be some kind of adept: perhaps ‘an intelligent adept who casts spells’. Your character focus would give you a spellbook, but you would only get one readied spell per tier, from a choice of two. You might get a few spell-like abilities from being an adept, like the ability to hover or become invisible, but the choice on offer is considerably more limited, and less crunchy, than what D&D players might be used to.

Players used to ‘levelling up’ might be disappointed. Character advancement works quite differently in the Cypher System: there are only six ‘tiers’ (not levels), and it is emphasized that gaining experience points is not a goal in itself. That said, unlike in D&D, XP provides other rewards, like rerolls, wealth, artifacts, long-term contacts, and story benefits like a home or a new job.

At the end of the session, we talked a bit about what we liked and disliked about the system, how it compared to D&D, and – crucially – whether we would want to play a Cypher System game as a full campaign.

There were things I liked very much about the Cypher System. I liked the focus on exploration and narrative. I liked the speed of combat and the lack of book-keeping. I liked character creation. After playing the Cypher System, I now want to go away and tinker with D&D a bit. I would be interested to handwave equipment, for example, and introduce more degrees of success for d20 rolls. I even wonder whether the game would suffer much from using average damage rolls.

However: D&D is RPG comfort food. It can be weird sometimes, and frustrating, and it bears the baggage of nearly half a century of tinkering and revision. But for all that, it’s reassuringly familiar. D&D suffers sometimes from trying to be all things to all people: it lists exploration and social interaction as two of its ‘three pillars’, for example, but, rules as written, it seems to reward little except combat. The Cypher System is certainly better in this regard. For a game of high fantasy dungeon-crawling, you might miss the crunch and precision of D&D. But if you have a group that wants to do more than bash, bash, loot, then definitely give the Cypher System a try.