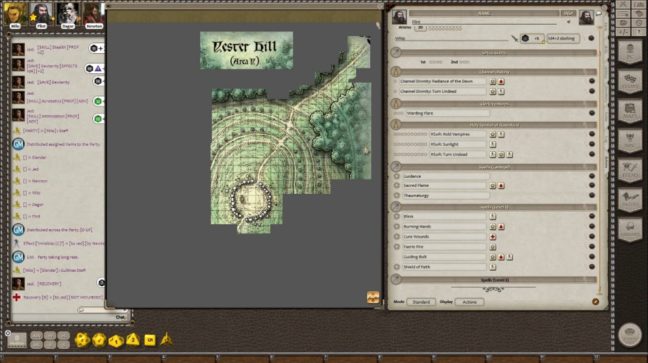 Due to the ongoing COVID-19 pandemic, many of us will have moved our D&D games online recently. Others have been playing online for a while, though, either because our friends have moved away or because modern life just makes online play easier than getting a group together in person.

Online play is not without its challenges, of course. That said, it can also bring with it certain advantages, and, done properly, it can be almost as fun as live play. In this article, I’m going to suggest some ways of making online play enjoyable and offer some reflections on the opportunities it brings.

For some players, online play is the only way of making D&D happen. Over the last four years, I have played and DMed online with a group of ten other people (not all at once, of course), and it is only since January that we have all been playing regularly in the same time zone. (I think the record may have been six players in three different countries.)

Virtual tabletops (VTTs) have come on leaps and bounds in recent years. After an initial learning curve, we are now very happy with Fantasy Grounds as our platform of choice, although some of us have branched out to Roll20 on occasion and found it fairly intuitive. Fantasy Ground has the edge in terms of its ‘effects’ coding (more on this in a moment), but Roll20 benefits from built-in support for audio and video. Some of my friends have switched to Foundry, and I’ve also heard good things about Astral. Similarly, though, I have also played some really fun games with nothing but Skype, Discord, or Google Hangouts.

Once you know your way around Fantasy Grounds, you start to appreciate how much of the game can be automated. From Tier 2 onwards, D&D has the potential to become increasingly ‘tactically rich’ – ie, complicated – and even experienced players can start to overlook things. With a good VTT, more and more of the game can be left to run in the background. Conditions, spells, class features, magic item effects: with a bit of know-how, you can set these up to run in perpetuity, or even code in ‘triggers’ based on if-statements. It’s also nice to manage big dice rolls with a single click: no more waiting for the wizard to add up the eight d6s for fireball.

When I ran the finale of Tomb of Annihilation at the end of October – and if you haven’t been lucky enough to play it yet, let’s just say it happens around 10th level and there is a lot going on – two of the players joined me to play the session in person, and the other three joined us online. But here’s the thing: all six of us continued playing with Fantasy Grounds because it’s just such a useful tool at higher levels. The Avrae bot for Discord offers similar functionality, although, having started with Fantasy Grounds, we haven’t really needed to switch to something new (yet).

Playing online can also give you easy access to other technologies like virtual character sheets, searchable rulebooks, and evocative background music. Many of these tools can be employed equally effectively at the game table, of course, and you see many DMs doing exactly this in their liveplay videos on Twitch and YouTube.

If technology is a boon, it can also be a curse. Connection difficulties, poor sound quality, slow internet speeds, unintuitive interfaces: these things can rapidly sap the fun out of online D&D, and need to be addressed preemptively, if possible.

I’m not knowledgeable enough about computer technology to start recommending webcams, microphones, ISPs, and so on. Every participant needs to test out their equipment ahead of time and find what works for them. It’s worth agreeing beforehand how you plan to handle connection issues: do you play on, pause for a few minutes, or ‘bubble’ the character until they return? It’s also worth pointing out that some players will have more luck with their phone camera than they will with their laptop’s built-in webcam. So, experiment: find the solutions that work for you. For example, we have one player in our group who cannot use Discord without his audio going haywire, for some reason. Hangouts and Roll20 work fine for him, though, so we just use that.

Playing online is also perilous because you are constantly surrounded by distractions. It can be hard to resist the temptation of emails, social media, and online shopping while you are waiting for your turn to come round. There are a number of ways to minimize this, however, as I explain below.

Tricks of the trade

For all the technological benefits a VTT can provide, online play can be slow. Really slow. It can take a while for players to click through their character sheets to the right section, and if you are playing with a grid, dragging tokens around on a map will never be as fast or as satistfying as moving miniatures across a table.

One solution: streamline the game. Yes, some players will balk at this, but at the end of the day, rule zero of D&D is having fun, and for some players, there comes a point where it’s worth sacrificing tactical depth for speed of play. Some suggestions, then:

‘Theatre of the mind’ might not be everyone’s cup of tea, but in 5th edition, playing with a grid is technically optional. I recommend theatre of the mind for online play. Gridded combat has its place, particularly with complex boss battles, but it can definitely be dispensed with for most fights when playing online. Whether it’s more enjoyable to play without a grid is something for you and your group to discuss and decide upon.

In this article, I’ve largely focused on the issues that are unique to online play. Many of the issues that affect online D&D are just as much of a problem offline, but they do tend to be amplified when playing over the internet. In closing, then, a few words of caution for players and DMs who want to move their game online:

Players: be ready on your turn. Learn how your character’s class features work. Save rules disputes until after the session. Listen to the DM. Try not to talk over other players. Don’t hog the spotlight (and if you don’t know who the spotlight hog is in your group: could it be you?).

DMs: relax. Be generous. Listen to the players. Try not to talk over other players. Don’t hog the spotlight. And read the room! This is so much hardler online, so consider an occasional survey to gauge how you’re getting on (I plan to do an entire article on this at some point).

The issues that come with online play are largely preventable, and, handled properly, a VTT can even enhance your game. Give it a try!