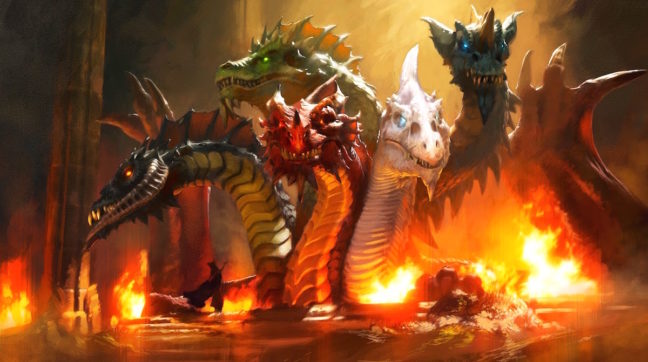 When planning a game of Dungeons & Dragons, a DM has to consider the short term, the mid term, and the long term.

In our context, ‘short term’ means encounters: short scenes based around combat, exploration, or social interaction. ‘Mid term’ would be an adventure: a series of encounters linked together. ‘Long term’, then, depending on your scope, is either a story arc or a campaign.

Planning a campaign from 1st level to 20th is not an easy undertaking. Tellingly, since 5th edition began, Wizards of the Coast have only published one complete adventure of this length, and that’s the Tyranny of Dragons storyline. (I suppose you could make a case for Dragon Heist and Mad Mage, too, but they don’t really form a connected ‘arc’ in the same way.) Mapping out a whole storyline over 100+ hours of play is a challenge. Before we move on, it’s worth considering why this is, and whether we should approach roleplaying games differently to other forms of storytelling.

Roleplaying games as a form

Roleplaying games are not just a ‘genre’ of fiction: they are a distinct form. And if we reflect on what makes this form unique, we start to appreciate why it is so difficult to plan a roleplaying game over the long term.

Firstly, they are collaborative. A DM doesn’t play the game on their own: the players create the narrative, too. It is a shared story.

Secondly, they are unpredictable. No other form of storytelling relies on dice rolls and random chance to determine where it is going next.

The problem with planning a D&D campaign over the long term is that it overlooks these two fundamentals. Collaboration and unpredictability make RPGs fun. Without collaboration and unpredictability, you essentially have a railroad, with the DM pushing the players through their own pre-written narrative. That might be fun for some people, but it rather misses the point of what a roleplaying game sets out to do. It owes more to novel-writing than shared storytelling, and ultimately robs the players of their freedom to choose, which isn’t very fun.

One of the best essay series I have read about RPGs is ‘Don’t Prep Plots’ by Justin Alexander. Sly Flourish has recently written a similar post on ‘Building Situations in D&D’ and the idea of letting go of defined encounters. Both posts are well worth reading in their entirety, but the central thrust is this: a D&D game is better off with a looser approach to planning.

To play D&D is to improvise, and if you’re the DM, you are probably going to do a good deal more improvisation than the players. Embrace this: don’t try to curtail it. If you go into a session thinking ‘the characters are going to do this, then this, then this’ then you are essentially going in with the intention of removing player agency. Stop. Much better to use the lazy approach from Sly Flourish: start strong, come up with a few key scenes and secrets, jot down a few encounter ideas and treasure parcels, then see where the players take you. It can be nerve-wracking at first, but the more you adapt to this approach, the more fun it is for the players and you.

However, this only really covers short- and mid-term planning. We’ve said that we want to see causality, conflict, change, character development. If we only plan one session at a time, how does that happen?

Even if you don’t plot a whole campaign, a story will emerge over time.

When you think about it, this is how stories work in real life (that is, in non-fiction). History isn’t plotted, but by looking at the past, we can trace how a series of interconnected triggers can lead to massive change. In fact, it is one of the great lessons of history that a seemingly random and unpredictable event can change everything that happens next, just like a fluky die roll in D&D. How many of us would have predicted in 2010 that, a decade later, Donald Trump would be US president, the UK would be leaving the EU, and a deadly coronavirus would be sending the whole planet into lockdown? These stories weren’t plotted: they emerged. And in 100 years time, they will be part of our human story, just like World War I and the industrial revolution and other complex historical events.

You don’t need a plotted narrative to have a fantastic D&D campaign. But there is one more trick I would recommend if you are looking for an overarching narrative in your games.

I have written before about the concept of story beats: originally a concept in filmmaking but now increasingly relevant in RPGs, largely thanks to Robin D Laws. Beats are the transition points or building blocks of a narrative, and while you can’t necessarily plan a plot for your campaign, you can certainly think about its beats. In 5th edition D&D, story beats overlap fairly neatly with the transitions between tiers of play (DMG 36).

What follows is adapted from Blake Snyder’s ‘Save the Cat!’ beat sheet, but adjusted for D&D using the guidelines in the DMG for session-based advancement (p 261). That is to say, I am working on the basis that a typical group gets through the first few levels of play quite quickly, and thereafter spends two to three sessions between levels. Your mileage may vary.

Two disclaimers. Firstly, you might be tempted to use this as a fairly rigid structure. In doing so, you run the risk of railroading and all the problems that come with it. Forecast, don’t plan. Secondly, most campaigns don’t hit level 20, and that’s fine. In fact, many campaigns don’t get much past Tier 1. You could adjust this structure for a shorter campaign and it would work just as well.

So, here goes: a 20-level guide to planning a long-term campaign.

1. Think of the game in terms of three acts: setup, rising action, climax. These correspond roughly to Tier 1, Tiers 2 and 3, and Tier 4.

2. The game begins at 1st level, but don’t feel pressured to start the story immediately. For the first few levels, let the players learn about each other’s characters: show them what the world is like before their adventures begin.

3. At some point towards the end of Tier 1 – I would suggest 4th level – introduce some kind of catalyst or inciting incident. Think of this as your ‘no going back’ moment: a call to adventure. Here again, take your time. Give your players a chance to ask: ‘now what?’ and mull over the next steps.

4. Think of ‘Act 2’ as starting around 6th level. This is where you can really start to expand your world and introduce new allies, enemies, and mentors. Most characters receive a significant power boost around this time, progressing from ‘local heroes’ to ‘heroes of the realm’. Try to end Tier 2 with some kind of midpoint. A false victory works well here: the players think things are going great, but they are actually about to get a whole lot worse.

5. From Tier 3 onwards, the players are over half-way through the story. This is where the bad guys close in and the world starts to unravel. If there’s going to be a moment when the heroes hit rock bottom, save it for the end of Tier 3. As with the inciting incident in Tier 1, give the players a chance to react to this: a ‘dark night of the soul’, where all seems lost.

6. Tier 4 is your finale. The heroes realize what they need to do and face their foes once and for all. The last four levels of the game focus entirely on the drama of the heroes’ final plan and the showdown with the antagonists.

If nothing else, allow the narrative to emerge naturally. Like a good wine, a narrative needs to breathe, so let things take their time.