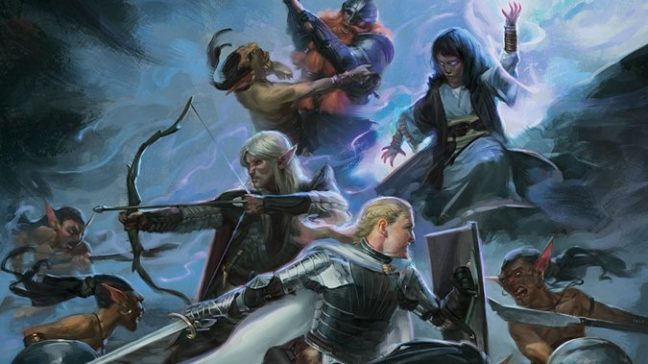 Of the three pillars of D&D, combat is the one most defined in the rules, and, for most groups, it’s going to take up a significant part of each session. D&D is a complex game, though, and, handled badly, combat has the chance to become repetitive, frustrating, or tedious. How, then, can we make combat as exciting and evocative as it should be?

1. Not all combats are equally engaging

This may feel like a cop-out, but it’s worth stating at the outset. Some combats are more meaningful, more challenging, or more memorable than others. Sometimes, the purpose of a combat is simply to give the players a chance to feel badass: a quick distraction from the rest of the session. Not every battle is a tense, vivdly described setpiece, and that’s a good thing.

Once you accept that combat comes in many different forms, embrace the variety that comes with it. Things to consider:

A common mistake in 5e is to throw too many difficult encounters at a group. Challening ‘life or death’ encounters might seem exciting, but ultimately this style of play pushes the party into having a five-minute adventuring day, with all the problems thay come with it. Justin Alexander makes a good case for roster-style scenarios in a series of essays, starting here.

This is a big one for me, especially in a group of more than four players.

Let’s say you are playing with a group of five players and a DM. If each person spends two minutes taking their turn, you will have to wait ten minutes before you can do anything. That’s a long time of sitting around listening to other people do stuff. If each player’s turn takes 30 seconds, you’re only having to wait for two and a half minutes. Much better.

People usually take too long on their turns for one of two reasons. Either, a, they are not ready to take their turn, or, b, they are hogging the spotlight. More on this later.

If a player isn’t ready on their turn, this isn’t necessarily their fault. Perhaps something unexpected happened, and their planned course of action has been scuppered. Perhaps, frankly, they are disengaged because other players are taking too long. Perhaps you’re playing online, and they are having connection issues. Perhaps they are new to D&D. Perhaps, though, the player needs to know their character better. Have a conversation with them. Give them a hand. Make a crib sheet for what they can do on their turn. It can be particularly challenging for spellcasters or classes with lots of different options like monks and paladins. But, players, you should understand the core mechanics of your class. If the DM can manage a million different things at once, you should be able to play the same character every session without slowing down the game for everyone else.

Like rules lawyering, this one varies by group. It may not be a huge problem for you. And like rules lawyering, it comes from a good place. If a player is waxing lyrical with florid descriptions of their character’s actions, they are probably fun and wanting to make the game fun for everyone else. But it can get a bit much.

When you deconstruct a player’s turn in D&D, they are – most of the time – making attacks and dealing damage. Do you need to describe every attack? Every hit? Every miss?

An argument can be made that describing every hit and miss is a result of misunderstanding hit points. It’s worth reiterating: hit points are an abstraction. To quote the Player’s Handbook, ‘Hit points represent a combination of physical and mental durability, the will to live, and luck.’ If a frost giant takes 16 damage from a longsword, what does that mean? A big cut? A little cut? A shock? A visible reduction in his or her ‘will to live’? I often bristle a bit when players ask ‘how damaged does it look?’ and not just because it’s blatant metagaming. It just doesn’t really make sense.

A suggestion, then. Describe the first hit, the killing blow, and the blow that puts an enemy onto half hit points (‘bloodied’ in 4th edition parlance). These are the hits that matter. And DMs, if it seems bathetic for an ancient red dragon to be killed by a club or what you, just because it only had a few hit points remaining, well . . . keep it alive! And likewise, if the paladin gives it a walloping with divine smite, but it technically still has a few hit points remaining, well, fudge it, and let the paladin describe the killing blow. Rule of cool.

There are a few tricks you can use as a DM to keep combat moving, too. Some suggestions:

This final point is not for everyone, and it depends on the type of game you want to play. Sly Flourish makes some excellent points as to why theatre of the mind has its place, and I largely agree. In general: if a combat is simple enough that a grid would slow it down, lose the grid. And, conversely, if it is complex enough to make theatre of the mind confusing, map it out.

One more DM trick: ambience! Whether it’s an exciting soundtrack ,or an awesome DM screen, or a set of really cool miniatures, art, music and props can really flesh out a combat and make it memorable. It’s always a great moment when the DM slaps down a massive mini on the table for the big boss fight. Don’t ignore these extra things.

Engaging combat isn’t all about speedy pacing, of course. Evocative description is a key part of the DM’s toolkit.

I say the DM’s toolkit, but players are just as important here. After all, in most battles, the players’ turns will take up much more time than the DM’s. As explained above, you don’t need to explain every action. But when you want to go big, how do you do that?

Essentially, this is all about good descriptive writing. Some tips:

One last thought: DMs, don’t describe the players’ actions! They only have one character to roleplay: if you take that away from them, they might as well stay at home. Give them their chance to shine.