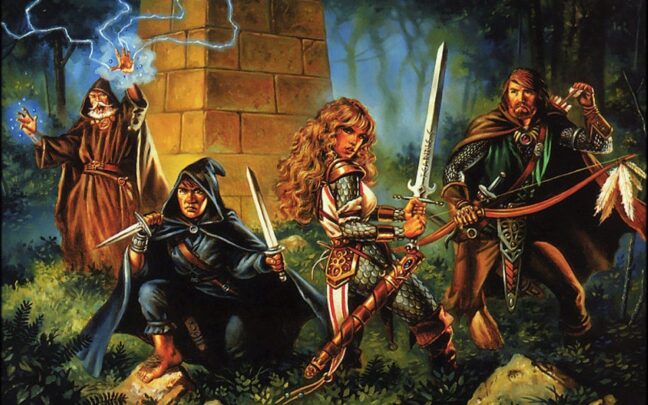 ‘At the end of the day, D&D is a game,’ a friend of mine said recently, ‘and some people just play it better than others.’

I’ve been giving this some thought of late. D&D is, of course, a game. It has rules. If you’re playing with a grid and minis, it also has a ‘board’ of sorts. But it’s also (a) extremely social, and (b) a creative outlet: an artform, even. Some players come along for the power-gaming, some want to roleplay, some just want to hang out. ‘Playing the game well’, then, is perhaps more complex than it sounds.

With that in mind, I’ve broken up this article into three sections: how to make the most of the rules; how to not be a dick (for want of a better phrase – aka ‘Wheaton’s Law’); and how to be a good storyteller and roleplayer. To me, the best D&D players are a mix of all three, but, at the same time, it’s OK to not be good at all of it. Everybody brings something different to the table, and that’s not a bad thing, either.

Don’t get me wrong: mastering the rules isn’t the be-all and the end-all of being a good D&D player. But it helps.

Knowing the rules will help you enjoy the game, even if the rules are not that important to you. It will free you up to focus on what’s actually happening at the table. Knowing the rules also helps to take away some of the conflict that might arise between the players and the DM. The rules are a neutral arbiter: if you all agree to follow them, there are fewer arguments about what you can and cannot do, and in a game that fundamentally revolves around making stuff up in your imagination, that matters. D&D is also a co-op game, of course, so if you know the rules well yourself, you’re also going to help your teammates: help them survive, help them kick butt, help them progress and feel badass.

As a player, then, what are the most important rules to know?

I’m going to skip over the stuff that’s truly basic: the names of the dice, the six ability scores, advantage and disadvantage, that kind of thing. All of that is a given. What all players need to be confident in is the options they use most frequently. Core class features like a rogue’s sneak attack or a paladin’s divine smite; racial traits like lucky for halflings and relentless endurance for halflings; feats like Great Weapon Master and War Caster. If it’s an ability you can expect to use at least once a session, you should be confident with how it works.

Why? For several reasons. Stopping to look up these rules is an unnecessary interruption to the flow of the game. It’s irritating for other players and the DM. It can lead to the party wasting its resources needlessly, or even, in the worst case scenario, character death. Now, if it’s a new character for you, or you’re new to the game, this is all, of course, forgivable. But if you’ve been playing for a few sessions and you simply haven’t bothered to find out what your character can do – ‘how does flurry of blows work, guys?’ – you’re going to rub your teammates up the wrong way.

What about spells? Should a spellcaster know how every spell in the game works? No, of course not. I’ve been playing D&D for nearly 20 years, and I’m still coming across spells that are new to me, particularly at higher levels. But if they’re your bread and butter, you should know how they work, and, to be honest, if you’ve chosen to prepare them, then it would be to have at least a vague sense of how they work.

If you are playing a character with a lot going on – a multiclass character, for instance, or one of the more complex core classes like a paladin or a spellcaster – then you may want to make yourself a combat cheat sheet. What’s your default action in most rounds? Are there any ‘combos’ you can do (like Great Weapon Master and Reckless Attack for barbarians). When do you pull out the big guns? And what’s your escape route?

Does all of this mean that you have to do a bit of prep to be a good D&D player? Frankly: yes. Not a lot – and there are plenty of great resources out there to help you, like rpgbot.net – but a bit of forward planning will make your character easier to play, faster to play, and better to play. You will probably have more fun, and so will your teammates. As prep goes, it will be nothing compared to what your DM is doing week in, week out.

There are horror stories on the Internet of truly toxic behaviour at D&D games. (Indeed, there’s an entire subreddit devoted to such things.) Fortunately, I’ve never had to deal with such people, but that’s probably because I’ve only ever played D&D with friends, not strangers.

D&D has an unwritten social contract. We’re all there to have fun: to tell stories, roll dice, make jokes, and escape the ratrace of everyday life. That’s why it’s great. But, just with any social activity, there are behaviours that are going to grate over time, and as players, it’s worth reflecting now and then whether we might be guilty of any of them ourselves.

As with rules mastery, I’m going to skip over the most basic stuff here. Racism, misogyny, rape: that stuff stinks and has no place at any table. And just to be clear: that list is only the start, and not exhaustive. (Incidentally, the latest edition of Pathfinder has a useful section called ‘the Pathfinder Baseline’ which is worth reading in its entirety. It is transferrable to any tabletop roleplaying game, not just D&D.)

Putting aside rules mastery and creative input, then, here are a few suggestions for being a good player:

I’ve probably missed something here. If in doubt, though, just don’t be a dick.

So far, I’ve focused on the mechanics (rules mastery) and the social side of how to be a better player. There’s one more category: how to contribute a fantastic D&D story.

This post is already getting a little long, though, so I will revert to bullet points again here.