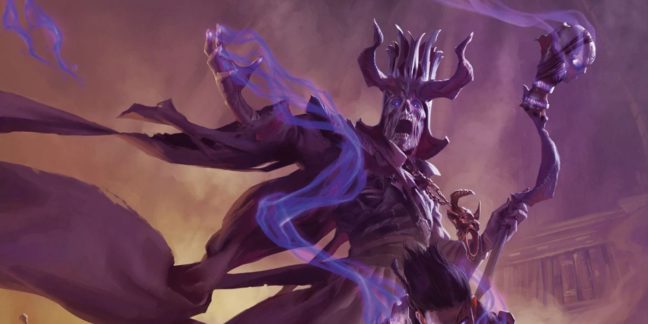 At some point in your D&D game, the party is going to come up against a villain of serious stature: a major enemy who has played a key role in the story so far and needs to be taken down.

In this article, we’re going to look at how to create a compelling and memorable villain who is also fun to play. For these purposes, the term ‘Big Bad’ refers to any major villain, not just the ultimate villain of the campaign. That said, most of the advice herein would apply just as well to a final villain, too.

Let’s start with the story side of things for the moment. How do we create a unique antagonist who will hold the players’ interest over the long term?

An antagonist is fundamentally an opponent or obstacle for the players. All stories have a conflict somewhere, and at some point, the heroes have to face their enemy.

This, of course, is an incredibly reductive approach, and rather mechanical. An effective antagonist should be more than just a bump in the road. After the player characters, they are some of the most important figures in your campaign.

A villain can be every bit as complex and rounded as the heroes. Like the heroes, they have goals, flaws, internal conflicts. They can grow and change. They make choices under pressure. Much of what makes a good player character can be applied to a good villain. What drives them? What makes them evil (or not)? How have they changed over time, and how will they continue to change? What is their deepest flaw, and what is their one redeeming quality?

It’s also worth thinking about your villain as a leader. Why do others follow them? In game terms, does your villain have a high Intelligence, Charisma, or both? Where does their power come from? Of course, some villains are so powerful that they don’t need allies and underlings. If this is the case, why have they not acted until now?

Consider how you plan to humanize your villain. Some of the best villains are effective because we can understand their pain in human terms. Anakin Skywalker turns to the dark side to try and save his wife from death. Sméagol is corrupted by the One Ring. Sephiroth loses his mind when he discovers his true origins. Some villains, however, are frightening precisely because of their inhumanity. Regan in The Exorcist, Hannibal Lector, Voldemort, HAL 9000, the Joker: these villains are malevolent becomes they are wrong somehow. They seem human, but aren’t quite, and this just makes them all the more frightening and malign.

Consider, too, how you plan to introduce your villain. There are different schools of thought here. Some stories prefer to ‘trail’ their villains and introduce them gradually through henchmen and hints, whereas in other works the villain is a presence from the very beginning. You can also, of course, do both: you don’t have to limit yourself to just one villain! Star Wars (1977) introduces us to Vader within the first five minutes, but we don’t meet Palpatine until well into Episode V.

On that subject: don’t feel you necessarily have to commit yourself to a single ultimate ‘bad guy’ from the start of the campaign. As I wrote in Planning a Campaign Story, mapping out a whole storyline is a huge challenge, and takes away from the collaboration and unpredictability that make RPGs fun. If you introduce the main villain of the campaign in the very first session, you’re going to struggle to maintain interest in that character for 100+ hours of play. You may instead want to come up with two or three loose concepts, see which ones your players gravitate towards, and go from there. In fact, you may want to hold off introducing a main villain at all until the end of Tier 1 (4th level). Let the characters get established first.

Finally, don’t fear tropes. As Salvador Dalí may or may not have said, ‘Those who do not want to imitate anything, produce nothing.’ We have to start somewhere. There’s nothing wrong with taking an existing character in tweaking them slightly. Strahd von Zarovich is essentially Dracula, yet, in the final print issue of Dragon magazine, he was ranked the greatest D&D villain of all time, surpassing Lolth, Vecna, and Tiamat. If you want to make your villain feel different, switch the gender, subvert a trope, or take two or more villains and ‘kitbash’ them together somehow. (Incidentally, this approach works well for campaign settings, too. Take samurai and World War 2, put them in space: Star Wars. Take Diablo and Mad Max, and you basically have Borderlands.)

Of course, though, it’s all well and good having a good character, but what about the stat block? You don’t want your showdown with the villain to be a disappointed. So, from a more gamist perspective, how do you make these boss fights memorable?

Sly Flourish (aka Mike Shea) has some excellent advice on boss fights in 5e. Rather than plagiarize it, you can his thoughts here. I also highly recommend Keith Amman over at The Monsters Know What They’re Doing, not only for his write-ups on the creatures in the Monster Manual, but also for his tips on how to apply his approach to the boss fights in the hardback published adventures. Lots to be learned here.

To this great advice, I would add my own:

Boss fights are definitely a good opportunity to crack out the battlefield terrain options, too. Make sure there is plenty of space available. As a rough rule of thumb, count how many spaces you need for all combatants and square it: that’s roughly how many spaces your battlefield needs to be. For example, if there are five medium-sized player characters, each taking up one space, and one huge enemy taking up nine spaces (15 ft by 15 ft), you probably want a large battlefield with around 196 spaces: (5 + 9)². That could be a 70-ft square, a 35-by-140-ft chamber, or something more complex. It won’t be a disaster if the battlefield is smaller than that, of course, but it will give the occasion a sense of importance if it takes a place in a space with real scale to it.

Villains can be hard to run. Managed properly, though, they can be some of the most exciting and memorable encounters in the campaign.